I turned over in bed last night, and bumped into someone sleeping beside me. But it wasn’t my husband, it was V. Which is not a surprise, because V sleeps with us every night.

Not any different from extended nursing, this was never our plan or anything we wanted! The story goes a little something like this:

We bring V home from the hospital on day three of her life. We put her in the pretty bassinet that our sister-in-law has let us borrow. The second we put her down, she starts crying. Every single time.

After two nights of this, I start to lose my mind. I message other mothers and see what is wrong with our child. Nothing, they say. Babies prefer to be held while they sleep. They’re used to being close to you.

That is not happening, I say to C. We will never cosleep.

We eventually figure out how to hack the system and in between the dockatot placed in the bassinet at an angle plus lots of swaddling, V will sleep for two hours straight. Sometimes.

I go back to work when V is seven months old. V still sleeps in the bassinet next to us because we live in a townhouse and sleep on the very top floor. I have not moved V into her own room yet because I am terrified of SIDS and from being away from her. And also of going down the stairs in the dark every single time she wakes up.

She starts teething. She wakes up every forty-five minutes. I want to die. I can’t focus on anything at work, I can’t remember anything. I am terrified that my new boss thinks I’m an idiot.

That is not happening, I say to C. We will never cosleep.

At nine months old, she is still waking up every forty-five minutes, and I feel like I’m dead. I start crying every time I hear her move because I know what’s coming. She has reflux, so if I nurse her, it means I need to hold her upright for thirty minutes after she eats. She sleeps during those thirty minutes. So fifteen minutes after I put her back down, she wakes up again. Some nights I don’t sleep at all.

One night I totally lose it and when I hear her starting to cry, so I just pull her into bed with me. To my complete shock and dismay, she settles in right away and goes to sleep.

She sleeps for the next six hours straight.

In the morning, nothing is fuzzy. I can see clearly. I feel sharp and awake and almost smart.

The next night, I try the same thing. Another six hour stretch.

It is a miracle. Even C is happy about it. This baby can sleep! Who knew? How long will any of this last — who cares! WE ARE SLEEPING AND IT IS GLORIOUS!!!

Until almost two years go by, and then we care. We care very much. Between V sleeping in the shape of a starfish and C’s muscular frame taking up half the bed, I am squished like a sardine in a can between them and I CANNOT SLEEP AT ALL. But now V is so used to cosleeping, and so are we. I cannot fathom the amount of nights we will lose sleep if I transition her to her room now.

So what do we do? We buy a bigger bed. The biggest bed they make.

It is awesome at first. We are back to sleeping. But almost immediately, C’s back starts to hurt, and after six grueling, miserable months, we count backwards in time and we realize, it’s the bed. The bed is what’s ruining his back. But we spent so much money on the bed that we can’t buy a new bed.

So now C is sleeping on our old mattress on the floor, and V and I are sharing this giant bed for just the two of us, which is ridiculous. And this is when I decide that I am ready to stop cosleeping. (And nursing. But we all know how that went.)

But she? She is not ready. Oh no. She sleeps as physically close to me as possible; she wraps her arms around my arm like I’m her teddy bear. I am constantly scooting away from her and crawling over her and turning over to get away from her. But no. No. Sometimes I think that if she could unzip my body and sleep in between my bones, she would.

So what is a mama to do?

Well, I google a lot about how to stop cosleeping. And we have taken the bottle away recently, which did not go well, but it also wasn’t the end of the world. Soon, no more nursing. Then, she will need to be moved to her bed, which has really just been a sort of pretty statue in her room for the last two years.

Does anyone else have experience with this? I mean, it’s not all bad…lots of families cosleep, especially in other cultures, and I won’t lie, the snuggles are nice. But man, it is time. It is just time.

When I first thought about writing a series of blogs called “Thing I don’t want to talk about / things I don’t want to say to you,” this was actually the first topic that entered my mind. It embarrasses me worse than how I’m aging and way more than still nursing. It’s the thing that I never, ever tell people. Our family knows, and some members are supportive and others make comments about it all the time. It has always been in our goals to stop (as it was never in our goals to start), it just needed to be the right time. 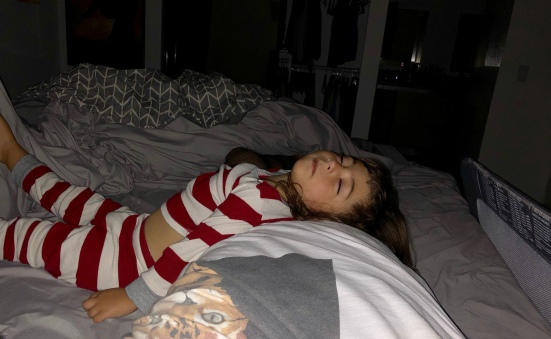