The way a place smells can really take me back. 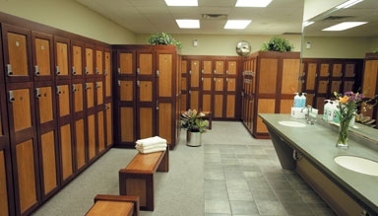 The locker room of the gym where I spent so many years! Losing weight, gaining weight, trying to become a different sort of person.

I look back sometimes and honestly can’t remember what it feels like to be a teenager. Or to be so heartbroken in my mid-twenties.

Today I walked into the gym that I spent years in. It’s had two different owners since I’ve been there and many promises of renovation that have clearly fallen flat. But man, that smell was still exactly the same.

I instantly could picture my friend Elizabeth at my side. How we’d start in the locker room and change into our gym clothes. (Because back then, people didn’t wear gym clothes 24/7). We usually had a book with us (Body for Life, or something by Jillian Michaels) for the workout we would do that day. We’d laugh/curse the world through the entire thing.

And then we would push ourselves so hard to the extent that we’d nearly throw up. (And then, after that, usually waste all of the hard work by going to eat an In ‘n’ Out.)

In my day-to-day, I don’t often recall how it felt to be that past me, like…to be in her bones. But just the smell of the lobby gave me access to instantly inhabiting her again.

How insecure she was.
How much she hated her body. How thin enough was never actually thin enough.
The joy of getting stronger and seeing progress. (Because in so many other parts of her life, she only went backwards.)
How she would run on the treadmill trying to squeeze the heartbreak out of her, doing anything not to think of him. (It often didn’t matter who the “him” actually was. They were interchangeable, then.)

If I could go back in time 12 years, I’d tell her that she was doing just fine. That all those reps would eventually equate to an interest in health that would shape what she’d do for her career. That she would, in fact, actually learn how to communicate and that she’d get married, and have a child, and all of it would be hers. Everything she wanted. I’d pat her little neurotic head and urge her to just relax. (And maybe to eat less In ‘n’ Out.)

What would you tell your self from the past? What places/smells/sounds take you back?