If you would have asked me how I was feeling about traveling internationally with my two year-old yesterday, I would have told you that I was not excited.

I was so nervous about getting her up at 4:45am, the drive to the airport, the five hour flight, and the car trip to the hotel. V is two, thus, she is not patient. At all. Ever.

Well, it turns out that I had nothing to be worried about. V did so great. 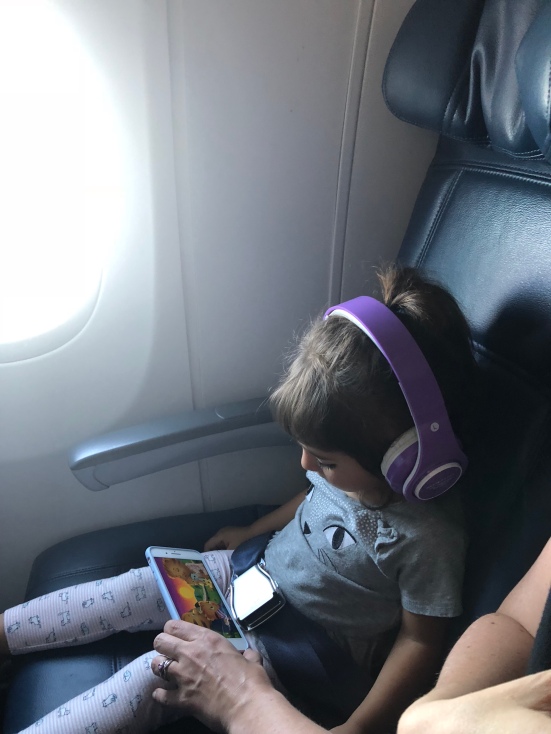 She barely made a peep on the plane. I had packed a bag full of *new* toys and books that she had never seen before. Hot tip: a mom told me to buy those cheap window clings at Target for any plane trip with a toddler. They’re usually in the dollar section. And V loved them! We had a set of rainbow crayon clings that we took on and off the window a hundred times. Also, I had two new books with the magic ink marker (it’s a clear ink marker and the pictures appear as you “color” the marker across the page); she loves those and was so excited to have new ones. I also had downloaded a couple of Sesame Street and Daniel Tiger episodes. And my husband brought a giant grocery bag full of her favorite snacks. Those things were enough to keep her completely entertained, despite the long flight. When I told her it was almost time to get off the plane, she said no! 😂

That doesn’t mean that getting here was easy. The amount of times we had to carry her, plus bags, plus finding the passports for the tenth time, plus going through customs, and then stepping out into a time zone that was three hours ahead and a long check-in process that felt like it would never end…yeah. It’s 5:37pm and we’re in the hotel with the lights off and the sound machine on. We’re exhausted! But so pleased with how our little wonderful girl travels. ❤️ And so excited to be here with our whole family. Can’t wait to share photos with you tomorrow!