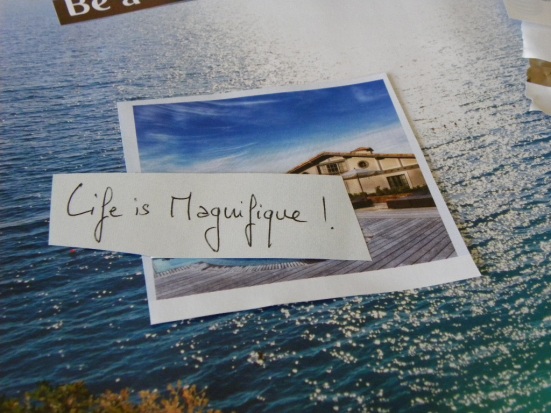 You don’t have to be all new agey, woo-woo or into The Secret to make a vision board! But if you really hate the term, how about just calling it a “collage” and let’s move on, mmkay?

I’ve been making collages since I was a teenager. To my mother’s horror, I once covered every square inch of wall in my bedroom (as well as much of the ceiling) with magazine cut-outs and photos on which I’d wasted precious color ink cartridges. When it was time to move out, there was tape residue everywhere! These days, I’ll just make a board instead of taping/pinning every thing to the wall.

The truth is that I’ve tried to break myself of this habit, but even my apartment in Japan had photos and collages all over the walls. It’s a creative release for me, and when I look back at my old ones, it’s pretty amazing how much of the stuff I wanted/dreamed about actually ended up showing up in my life! For this alone, I tend to make vision boards about once a year, but I’m not strict about it. Whenever I’m feeling like I could use some direction, I end up tearing out magazine pages.

A few weeks ago, my friend Marianne and I were discussing our future, or, more realistically, our lack of a plan for the future. She suggested we have a vision board-ing date and I, ever-so-eager to cut photos out of magazines, jumped at the chance!

There are so many ways to make a vision board, but I figured I’d walk you through our process for fun! 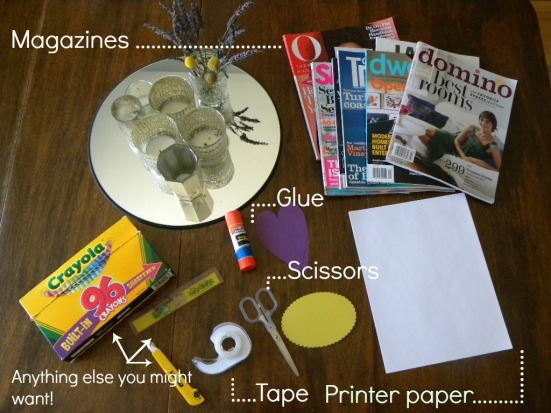 Also, Marianne had the great idea of printing out photos from Pinterest – I wish I would have thought of that! But in case you don’t have a printer, it’s fun to scour through old magazines. Let serendipity have its way, I say.

“Where’s the posterboard?” you might be asking. Ah, dear reader, this is SMALL life, Slow Life – good ol’ printer paper taped together will do. There is seriously no need to  spend even a single dollar on this project!

Once you’ve got supplies, you can get going. Or grab a friend (or two). 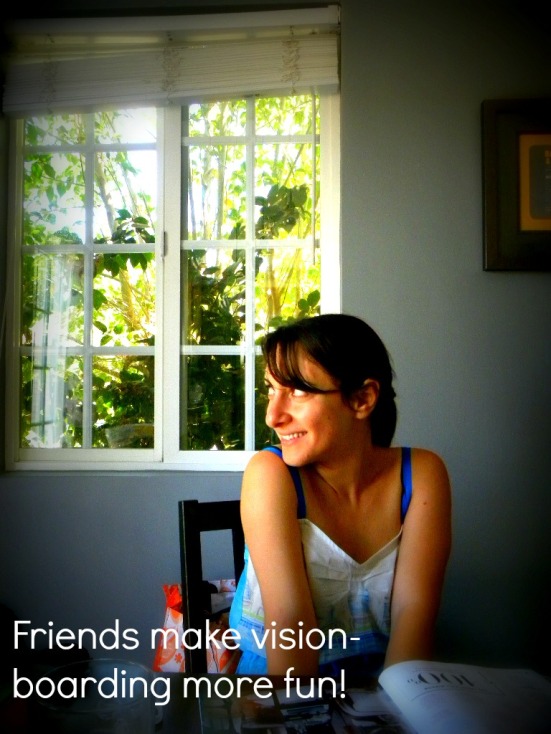 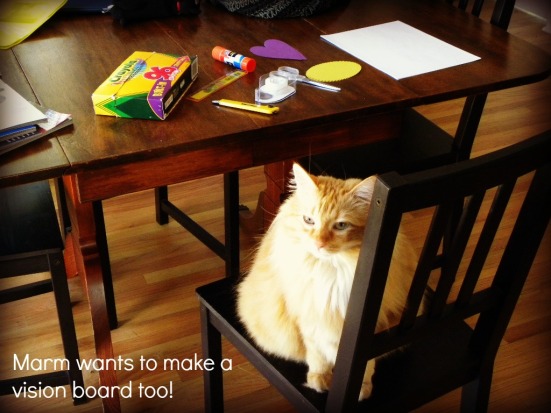 I begin by taping four sheets of printer paper together. No need to tape up both sides – one strip of tape going width and length-wise will do just fine. I started with four sheets but ended up with a total of eight, all taped together. My vision board is HUGE. Nothing wrong with dreaming big! 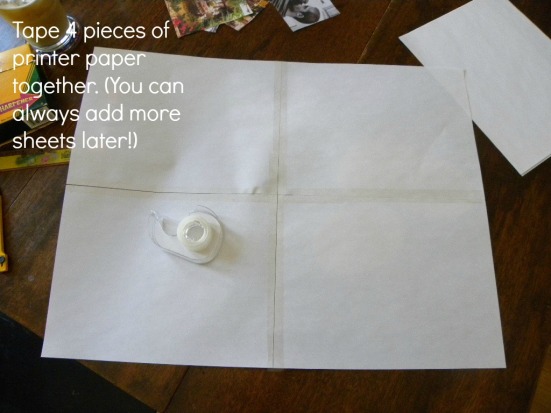 Once your paper is taped together, it’s time to cut any pictures you may have printed, and my favorite part – go through magazines and pull out anything that inspires you. Some people have a concrete idea in their heads when they’re making vision boards, but I always go in with an open mind. You’ll be really surprised by how thematic your clippings will look, even when you’re just finding things you randomly like.

Once you have all your inspiration together, it’s time to cut! 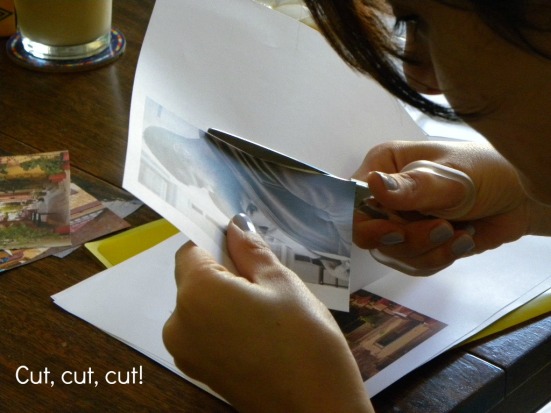 This is the super fun part – gather all your clippings and see what’s calling you. For me, it was long vacations with tropical beaches, a new home and family/self time. Even the colors went well together. 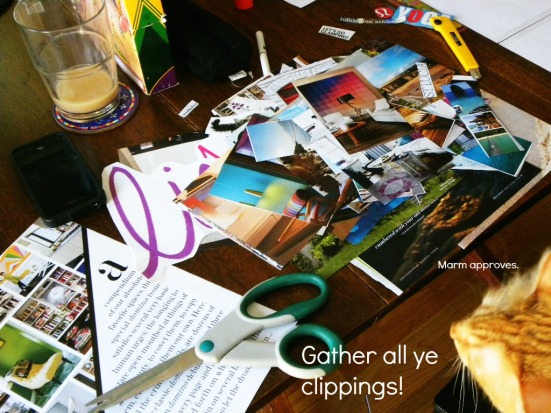 As you do the layout, there will naturally be photos that don’t fit or just don’t call your name anymore. That’s okay. Even when I’d expanded my printer paper, there were a few things that just didn’t make the cut – surfing lessons, a dog/cat, and a photo of an ivy-covered house. 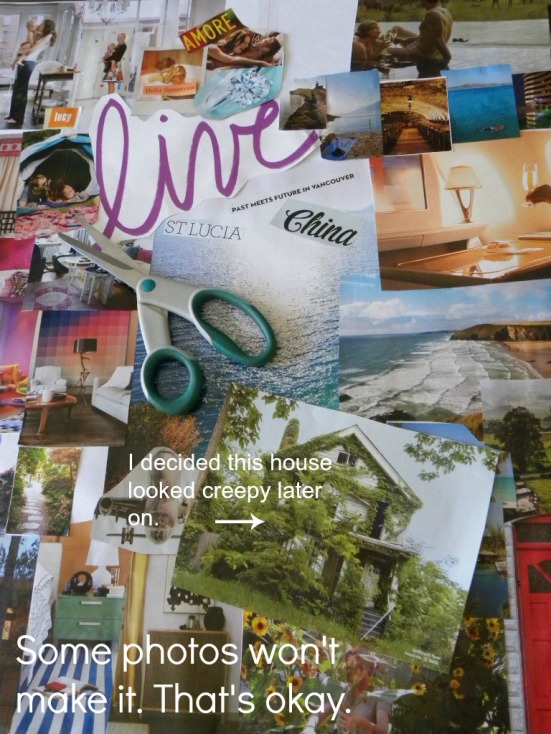 Once you’ve cut what you need to, it’s time to glue! I prefer using a glue stick, preferably one of the colored kinds that dries clear. I’ve made collages for a long time, but it still helps to have colored glue let you know that you’ve gotten all the corners. Some people prefer liquid glue, but I don’t like the way it crinkles the magazine clippings when it dries.

The finished product is always so fun! Here’s mine:

“Sleep” is very clearly at the top right. I’ve been having trouble lately.

You can very clearly see what I’m craving here. I even cut out two pictures of the same house without realizing it! 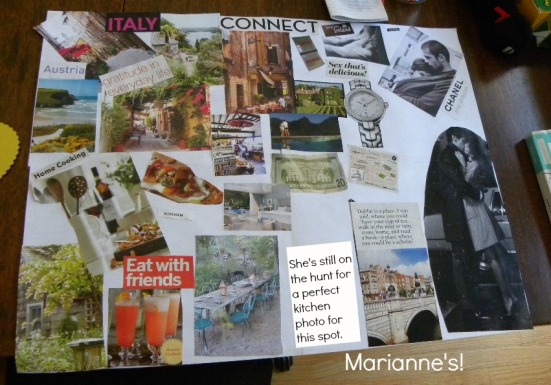 It doesn’t look like Marianne and I will be traveling together – while my board is all about tropical islands, hers is all about Italy!

After all the work he did, Marm was really tuckered out! 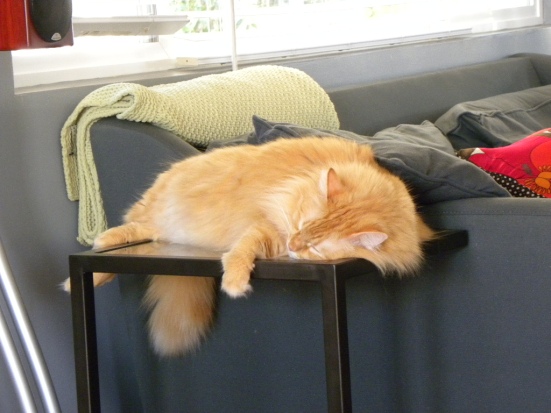 When I got home, I moved some stuff on my wall around and put my vision board right above my writing space. In fact, I’m looking at it while I type this! 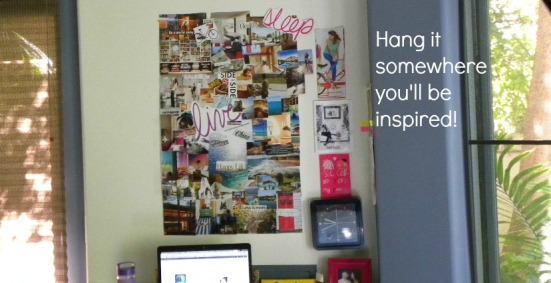 And that’s it! Marianne and I had the best time and promised each other we’d have another vision board date in six months!

Marianne and I also had the idea of creating a wacky, random vision board and then writing a novel based off of the images collected in the board. Could be fun – maybe?

Whether vision boards work or not, they’re a really fun way to bring some inspiration into your life + get an idea what you’re wanting for the future.

Have you ever made a vision board?

19 thoughts on “Small Life, Slow Life: How to Make a Vision Board! {Photos}”