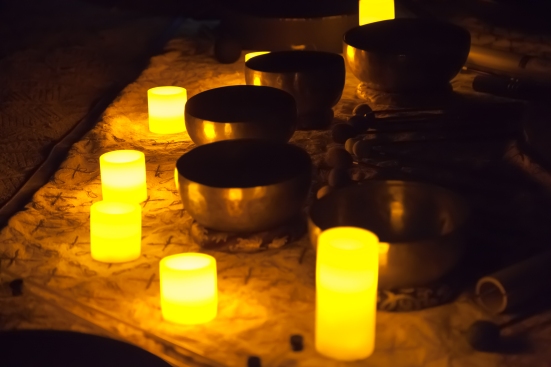 Finding your way through the darkness is a part of life.

I’ve been writhing in some emotional pain. Hello, suffering…haven’t seen you in a while.

Life has some growth planned for me lately, so one difficult situation has been popping up after another. It feels like a bad dream sometimes…just when one situation gets solved, like magic, BAM! There’s another one to deal with. Like dominoes.

I find myself reacting instead of responding. Pacing the hardwood floor at 2am instead of sleeping. Feeling the tightness in my chest that feels like a hundred wires all tangled up with the sensation that something needs to snap, and soon.

I find myself operating out of fear instead of trust. Watching as the number on the scale goes down and down even though I’m eating enough. Jumping at every phone call and email. Obsessively checking email instead of enjoying a morning off. Thinking, “What could possibly go wrong next” instead of, “I know this season has a purpose and that it’s all going to magically whoosh together in a beautiful way that will teach me something so important.”

Look guys, even I forget my own advice. I still have those seasons of pain, and I still try to resist them.

Haven’t I been through this enough now? Haven’t I learned that every heartache lends itself to a deeper, future joy? Haven’t you?

And like…wouldn’t it be cool if every time we were experiencing something difficult, we could operate from the innate knowing that we were being taken to the next level instead of being taken down?

Wouldn’t it be incredible if we faced the pain, and cried every time an intense emotion hit while knowing that every tear got us 1% closer to full healing + self expression?

Wouldn’t it be amazing if we kept opening up even while being given thirty reasons to get guarded and shut down?

Yeah, it would be. But it doesn’t always happen that way.

Sometimes the pain is unavoidable. It seems ordained. We know that we need to change our perception about it, but we’re locked in a mental battle and can’t get through it yet. The future you who could handle this pain is still in the process of being born.

I’ve written a lot about that kind of pain after a break up…how you have to be miserable as part of the process, and that eventually, a “snap” will occur where you’ll be so sick of yourself that you’ll get to your boiling point + make a choice to not feel that debilitating sorrow anymore.

And sometimes, as much as we want to short-circuit that process and just fast forward to the “snap” part, we actually have to endure the hours/days/weeks/months of pain. There’s a lesson in that kind of grief, frustration, and sorrow…and as much as we want to jump over it like a hurdle in our path, we can’t.

The point is, I’m there with you. I’m actually there with you right now. My heart is hurting, and I want to jump ahead to the part where everything is solved, and there’s no more sadness. But this is a season of growth and grief, and so I’m in the passenger seat of this car on an unfamiliar road…waiting for my “snap” to come.

All I can do is remember that there’s a reason that the words “grief” and “growth” even sound alike…and it’s because they’re inseparable. One lends itself to the other. And when partnered together for a certain period of time, they eventually melt together to become joy. Like alchemy. Every time.

Wishing you all comfort during the seasons of grief/growth.

14 thoughts on “Small Life, Slow Life: Even I Forget My Own Advice. [Seasons of Growth + Grief.]”